International Day of the Girl

On October 11th the world celebrated the International Day of the Girl.  And this year, we at FUTURES, tip our hat off to a program that, through working with men and boys, makes it possible for girls to live a more secure and fulfilling life. One where if one day they do not show up for school someone steps up, searches for them, takes a stand to make sure they are counted,  and endeavors to provide them with the opportunity to learn and grow.  This a world where girls will grow up knowing that their presence is vital and their absence is noticed.

When school administrators, coaches, or youth service providers visit the official Coaching Boys Into Men (CBIM) site, www.coachescorner.com, they are seeking programs that can advance positive and respectful relationships among youth, they are seeking programs that can help young men see their role in society in a more positive light where healthy and respectful relationships are the norm, where bullying or homophobic taunts are not tolerated, and where young men take pride in being up-standers and see as much harm in standing silent while another is abused as if they threw the first punch themselves.  CBIM was founded on the premise that athletic coaches play an extremely influential and unique role in the lives of young men. Because of these relationships, coaches are poised to positively influence how young men think and behave, both on and off the field. Often, though, when schools or coaches seek the tools and trainings provided by CBIM they don’t realize how it also serves as a transformative experience in the lives of those who instruct as much as those who listen and learn. 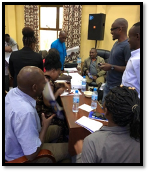 Those participants then in turn trained 100’s of coaches and school administrators who delivered the CBIM curriculum to thousands of young men in Mbeya and Songwe. While it may be some time before the long-term impact of this work in Tanzania can be seen and measured, we are already receiving moving narratives of how meaningful trainings and conversations around the role of boys and young men in society can be the catalyst for deliberate and heroic efforts which transform the lives of young girls.

A story from the field, courtesy of World Vision Tanzania: Over the past seven months, Nyanda and Josiah have been coaching more than 40 athletes at ITALE Primary School.  They were two of the coaches that took the CBIM training offered by World Vision Tanzania.  Through their weekly instructions they helped their athletes understand the meaning of healthy masculinity, friendship and relationship. 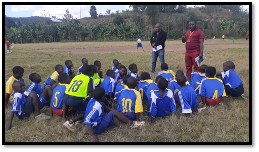 When schools were closed due to the Corona Virus pandemic, Aadila (11) (name changed for privacy), a young girl who lived with her Grandmother at Itale Village in Ileje District, went on holiday to Tunduma to stay with her mother, her husband and 2 other children. While at first she enjoyed the visit with her family, she did not know that there was no plan to return her back to school.  Aadila was to stay at her mother’s in order to assist with domestic chores. The temporary school closures due to COVID were to become a permanent end to her education.

“When we opened the schools in July, I didn’t see Aadila anywhere but I thought it was normal absenteeism, till one day the report came from her grannie’s neighbor that she was seen in Tunduma. I decided to follow up what was happening and so I went to question her grandmother and found out the truth. Her mother wanted Aadila to study no more so she could help take care of her younger siblings.” Mabula said.

He added, “As CBIM Coach, I took an oath and committed to take a stand against any kind of violence, abuse, neglect and exploitation. Being a role model to my athletes, I decided to take initiative and do something. I reported the incident to ward education officer and I was handed back the task. I couldn’t stop showing up at her Grandmother’s house to insist on her return. There were achievements and within a week, she was returned and she is now doing well at school.”

Aadila shared her story in this compelling narrative:

I used to cook, feed my siblings and take the food to where mom does her business. I enjoyed the stay until when schools re-opened. I needed to return to grandma for school but she always said NO. I one day took my mom’s phone and called grandma of what was happening but she also knew that my mother didn’t want me back to her.  I thought that was the end of my education and there was nothing I could do, till one day I was told to prepare myself for the journey back to Itale. My step dad escorted me to Vwawa where I was taken by my uncle back to Itale.  I am so happy I am back to school, I love studying and when I grow up I wish to be a teacher. I love my mother but I will not go back to Tunduma until when I am done with school.

The CBIM coaches now share this powerful story as an example of how to stand up and make a difference.  They note to their athletes and students that if they find themselves in a similar situation, where they witness or know of incidences of abuse, violence, neglect or exploitation, that they take a stand and do something.

The post International Day of the Girl appeared first on Futures Without Violence.