When my son Mark died in 1998, I couldn’t even
say the S-word without losing it. Finally, to quell the guilt, anger, and blame swirling around me, I went to my bedroom, shut the door and screamed SUICIDE several hundred times.

After a soothing cup of tea with honey, I called my sister and other close friends and calmly declared, “Suicide.
SUICIDE. Suicide.” They understood and supported my effort. They repeated it: “Suicide. SUICIDE. Suicide.”

September — National Suicide Prevention Month — exacerbates my experience of loss. As I’ve slogged through 22 Septembers without Mark, two personal goals have become clear: I want to encourage those who suffer from mental illness to live, and I want to help survivors who’ve lost someone to find peace. My friends and family had stood by me in my grief, and now it was my turn to do something beyond yelling in my room. Since September might be the worst month for a recent survivor of suicide, I started there.

Every September, all the mental illness and suicide-awareness nonprofits speak up and you can’t open a newspaper, go online or hear a public service announcement without being reminded of the dire statistics. Each year in the U.S., suicide is the second-leading cause of death for those aged 10 to 34. In 2018 nearly 50,000 died by suicide, and 1.4 million people attempted suicide. Overall, 54 percent of Americans are somehow affected by a suicide. When I first read those numbers, my heart contracted and the one fact that mattered most to me — that I’d lost my eldest son — rose to the top, dragging me back to the funeral home where I sat at a mahogany table, trying to decide between a casket and an urn.

We’re often taught it is better to give than receive. But I think there’s an unspoken part of this lesson: The more we give to others, the more we can receive back and give again. I knew I needed to receive. I had lost so much. And I sensed that telling my story would help.

So, I practiced more words and began to make speeches, first for my Suicide Support Group. I shared first-year survival tips like whether to make a favorite cake on Mark’s birthday (I did) or hang his Christmas stocking on the mantle (I did, but not all families do). Mixing research with personal experience to tell stories about my family is the presentation format I still use several times a year.

I was more experienced by September 2000, when I spoke for the first
QPR Gatekeeper training at The University of Tennessee, Knoxville. I was nervous. Standing before an auditorium full of colleagues and students and stating explicitly that my son had died by suicide felt challenging. As I waited, other presenters taught us to save a life using the QPR Institute’s progressive three-step intervention.

Then I spoke about loss and missing, and why it was important to help those we thought were depressed. People took notes, nodding their heads in agreement. To close the training, I sang a song Mark’s younger brother Luke wrote for him. Somehow, I kept my voice steady for the last verse:

The leaves are slowly fading, as summer’s giving in,

Fall’s war is slowly raging, and will time and time again,

The seasons are ever changing, as I will never do

I’ll always be wishing for you.

Some audience members wept, which I welcomed, for I’d learned that crying was a step toward healing, and my revelations had released their tears. My fear about telling our family’s story began to diminish.

But it wasn’t enough just to talk. I began taking personal action about suicide during September. Last year, I invited a few friends for lunch, each of whom had supported me in ways none of us could have foreseen when we first met. Jeanie and Nancy K. had come with me to the hospital to identify Mark’s body and remained by my side while I met at midnight with the tissue and organ donation team. Dorothy, Helen, John and Candy had planned the service and reception at our church. Marnie, a former social worker, had offered practical advice. Julie joined us from California, representing the talented, loving writers who have critiqued drafts of my memoir about Mark over the years.

Our lunch was wonderful. After coffee and dessert, we posed in our “Speak Up! Save Lives!” T-shirts for a Facebook photograph, to support one of the Tennessee Suicide Prevention Network‘s September projects. Together we had become advocates for open discussion about mental illness. Our message: Address your concerns about your loved ones! Never pretend problems don’t exist! 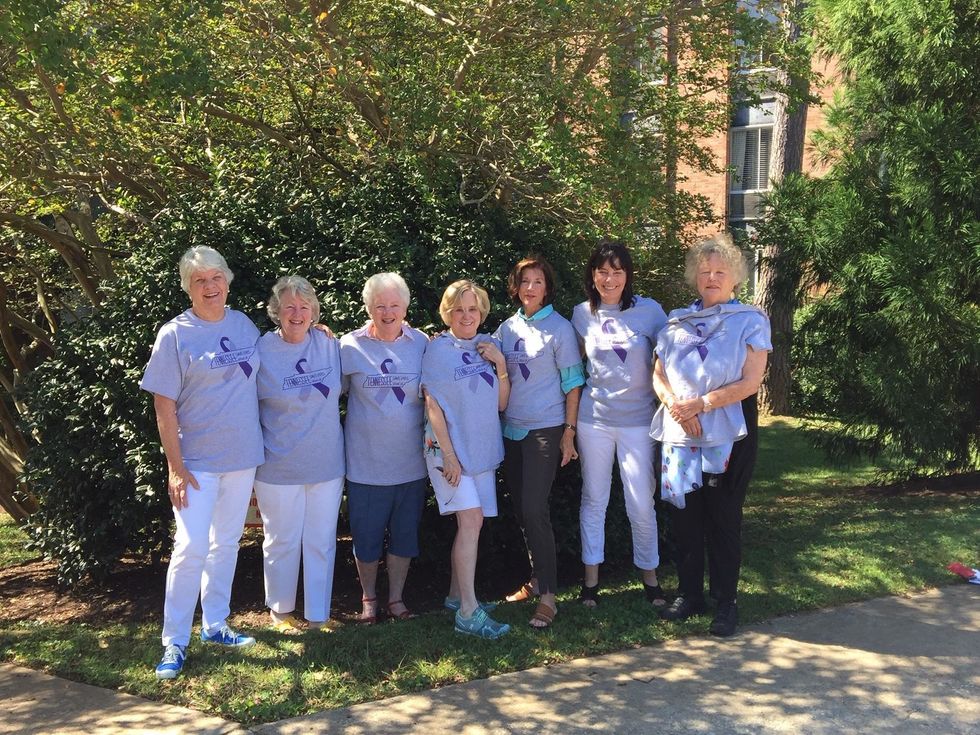 Last fall, I volunteered as usual for the local American Foundation for Suicide Prevention Walk Out of the Darkness event, coordinated by my Suicide Support Group and other community volunteers. We raised $25,000 for suicide research. While others walked, I emptied dozens of bags of flower petals I’d filled the night before into Appalachian-made baskets. When everyone returned, we gathered again and I shared the symbolism of each type of flower and herb. Then some 500 survivors gently released the offerings into Lake Loudon.

My hope was that pain would float away, nestled inside each petal. I’d collected roses, for love; blue delphinium, for dignity or renewal; and fresh rosemary from my little herb garden to remind us that our absent ones would always be remembered.

Thirty days hath September. Each one brings reminders of love and loss that strengthen my resolve to help, as I remember. I wish Mark were here to lend a hand. We would laugh, sing and talk about our lives as we filled baskets with petals for the journeys through all our Septembers and the long, colder months to come.

Nancy McGlasson retired early to tell her stories, after working 40 years as a teacher and administrator at The University of Tennessee, Knoxville. She’s writing two memoirs: Flying Kites at Night, about her son’s suicide, and Make Yourself an Interesting Woman, about her white grandmother’s musical career, which was based in African-American traditions.